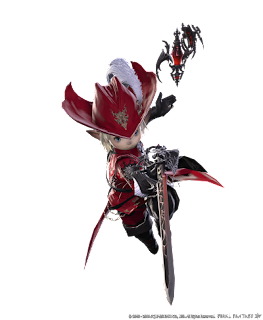 This guide is ideal for level 70 red mages who are starting to get into raids and are looking to improve their damage output. The guide focuses on improving single target spell usage in a raid environment. Gear, raid food and dungeons are not covered. This guide is undergoing an overhaul, so stay tuned. A more detailed guide can be found here

The calculations in this guide are ballpark estimates. Certain assumptions might be made or certain factors might deliberately not be taken into account to simplify the calculations. I do my best to state those assumptions or excluded factor. If you feel that an assumption or an excluded factor is causing a significant skew in the numbers feel free to leave a comment with a correction. Numbers regarding the % of the total damage a certain spell constitutes are based on a manual aggregation of small number of the publicly available Red Mage parses such as this one.

You are probably already familiar with the basic red mage spell rotation, which is explained in details in various guides and is eloquently summarized here:
https://www.reddit.com/r/ffxiv/comments/6hn967/red_mage_rotation/ 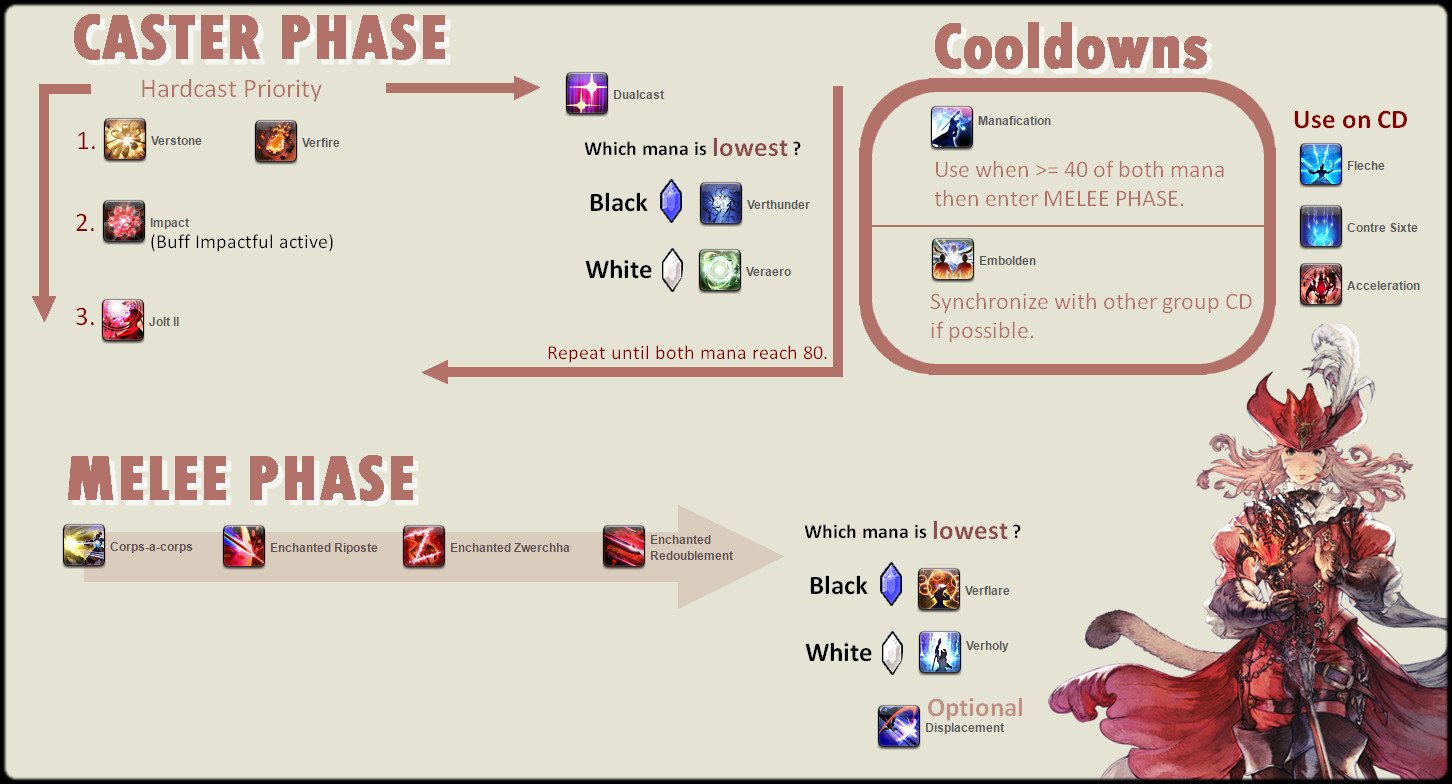 After using a dualcast, there's room to weave in 2 spells that are off the global cooldown (oGCD) during the ranged rotation and 1 spell during the melee combo without slowing down your rotation. The exceptions are Displacement and Intelligence Potion, both of which need to be weaved separately due to their long animation time.


oGCDs to use on cooldown

Using these spells on cooldown goes a long way in maximizing your total damage output.

Being able to use the spells immediately as they're available is not easy and might need some practice. One thing that could help is putting them on a hotbar that is in the middle of the screen where they're much more visible.

Always use Fleche as soon as it is off cooldown. Due to its high potency, Fleche accounts for up to 11% of your total damage when used on cooldown, so keeping it off cooldown even for 1 global cooldown repeatedly could cause an overall 1% dps loss*. Fleche (and other oGCDs) can be weaved into your melee combo without causing a loss of the combo proc.

Everything that was said about Fleche can be said about Contre Sixe with some tweaks to the numbers. If used on cooldown, Contre-Sixe would account for ~4% of a your total damage.

If you’re keeping Corps-a-Corps / Displacement exclusively for mobility you might be missing out on 3% of your damage, so be aware of this trade-off. If you decide to use them on cooldown to maximize dps, keep in mind that their cooldowns are reset when casting Manafication. Even though Displacement has a lower cooldown than Corps-a-Corps, practically you might end up using it just as often since using Displacement at the wrong time could lead to death or a party wipe.

Acceleration is a bit overrated since it constitutes ~0.27% of your overall damage* even if used on cooldown, but every bit of damage still counts.

Swiftcasting Veraero / Verthunder on cooldown could improve your damage by up to 0.35%*. Even though Swiftcast has a longer cooldown, it provides a better overall value than Acceleration.

There's no point keeping Swiftcast for an emergency Verraise since Dualcast can take care of that. If both Verstone Ready / Verfire Ready are procced, it is better to wait on Swiftcast till one of them is consumed. If you're about to get to a part of the fight that needs mobility, waiting might also be a good option. Unlike Fleche, Waiting a few seconds on Swiftcast will not affect the overall damage output **.

* This can be done by calculating what the damage would've been if we used 9 less Swiftcasts in a 600 seconds raid fight. The exact calculations can be found in this spreadsheet. This assumes that the number of melee combos are the same with and without Swiftcast and ignores the potential extra mana provided by Veraero / Verthunder compared to other spells.

**Swiftcast can be used 9 times in a 600 seconds boss fight, leaving a total wait time of 60 second, or an average of 6 seconds per cast.

Making a habit of staying in melee range could boost your damage by up to 0.3% from auto attacks.

Proper timing of those spells goes a long way in helping your team and maximizing your total damage output.

If you're trying to use Embolden to improve your own damage, a good way to do so is use it with the melee combo, in which case it would constitute up to 1.1% of your overall damage*.

While embolden does not amplify the normal melee spells, it does amplify their enchanted version since they're considered magic damage. The hardest hitting spells in the combo are Verholy / Verflare and Enchanted Redoublement, so we'd like to cast both spells within the first 4 seconds of embolden to make use of the full 10% damage amplification**. Since the melee combo has a fixed recast time (1.5s / 1.5s / 2.5s) that is unaffected by spell speed, using Embolden after Enchanted Zwerchhau (the 2nd spell of the melee combo) is the safest way to guarantee that. Fleche and Contre Sixe deal physical damage and will not be amplified by Embolden, so no point trying to synchronize them.

Embolden increases the physical damage of the party as well, so if you feel that your party can get a better value out of Embolden by synchronizing it with the cooldowns of the melee dps instead of your own cooldowns feel free to do that.

** Enchanted Riposte (210 potency) and Enchanted Zwerchhau (290 potency) have a lower total potency than Verstone / Verfire (270) and Veraero / Verthunder (300), so it's better to have embolden overlap with the ranged spells instead of the first 2 spells of the melee combo

Using an Infusion of Intelligence HQ on cooldown in a raid could boost your damage by up to 0.9%*.

Similar to Embolden, an intelligence potion is best used with the melee combo. If both Embolden and the intelligence potion are up, it might be preferable to use the potion after Enchanted Riposte separately due to its slow animation. If you have a normal quality potion, you will likely get a chance to use it only twice in a raid encounter. If you're really short on DPS, consider using it immediately after pull so you get a chance to use it 3 times. If you're using a HQ potion, you have the luxury of synchronizing its 3 uses with 3 of the melee combos. If you're using an Infusion of Intelligence, getting your mana close to 100 / 100 with Manafication up before starting the melee combo could allow you to use your melee combo twice during a single potion use.

* This is the roughest calculation in this guide. At ilvl 330, a Red Mage will have about 2400 intelligence. Infusion of Intelligence (HQ) boosts your intelligence by 137 for 30 seconds. In a 600 seconds raid encounter where we get to use the potion 3 times, we'd have (2400 + 137) / 2400 = ~5.7% extra intelligence for 30 * 3 / 600 = ~15% of the fight. If we take a leap and assume that 1% extra int is equivalent to 1% extra damage, we'd get an extra 5.7% * 15% = ~0.85%. This leap isn't completely arbitrary, some testing on the practice dummy shows a direct linear correlation between intelligence and spell damage. At 660 intelligence (a naked Red Mage), Jolt II hits for about ~1300. At 2419 intelligence (ilvl 330), Jolt II hits for ~5200. This means that when controlling for weapon damage, increasing intelligence 4 times roughly increases the damage from Jolt II by 4 times, so the 1% int =~ 1% dps estimate might not be too far from reality. This calculation doesn't take into account that the potion use will be synchornized with the melee combo, but according to the calculations below, it might be reasonable to bump it up to 0.9%.

Your healers will love you if you use Mana Shift to give them mana. Due to its long cooldown, Mana Shift can practically be used only 3 times in a raid.

As a red mage, you should not run into mana problems if you use Lucid Dreaming. While the first use of Lucid Dreaming can be used with Mana Shift, subsequent uses do not have to. Using Lucid Dreaming on cooldown after the first use will allow you to use it 4 times in a raid encounter, giving you enough mana for all the Mana Shifts and maybe even a Verraise if your party needs it. Even though Lucid Dreaming reduces enmity, it's not worth saving the cooldown for when you draw aggro. Timing Diversion is the best way to stay safe.

The obvious use of diversion is during the opener, but it can also be useful during boss fights where adds spawn. For example, during Omega v3s (Halicarnassus) a good time to use diversion is right after she spawns White Flame, Great Dragon or other adds.

While there's some damage gains to be had by being more careful about balancing the mana gauge, this is the highest effort to gain ratio method for achieving those gains. You're advised to approach the information here from a "knowing for fun" angle. A few notes:
* According to the calculations in the Manafication section, 1 point of mana is worth 0.00275% of the overall damage. Similar to Acceleration, a Verstone Ready / Verfire Ready proc from Verholy / Verflare replaces 1 use of Jolt II (0.26% overall damage) with 1 use of Verstone / Verfire (0.3% overall damage) against a baseline of 20%, for a total of 0.8 * (0.3 - 0.26) = ~0.03% overall damage per proc. 11 points of mana is worth 11 * 0.00275 = ~0.03%.
To put them in action, here are some scenarios that you may encounter and suggestions on how to best react to them. This is not to suggest that those specific scenarios need to be memorized, but rather that the suggestions on how to handle them could provide insights on how to deal with similar ones.